Posted at 13:24h in Past Exhibits by pat_admin 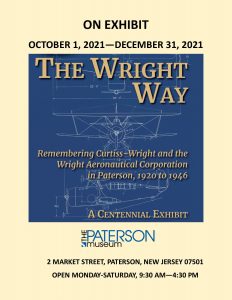 Originally planned for 2020, this exhibit is a collaboration between the Paterson Museum and the Passaic County Historical Society to commemorate the centennial of Wright Aeronautical, later Curtiss-Wright, opening its ﬁrst plant in Paterson, in 1920. The company would remain a major employer throughout the Greater Paterson area for over two decades, opening a series of plants on both sides of the Passaic River. Once described as “the largest airplane engine factory in the United States,” the Paterson plant employed over 2,400.

The exhibition features photographs from both the Paterson Museum and the Passaic County Historical Society’s collections. Many of these images were digitized, courtesy of the Fred J. Brotherton Charitable Foundation. All from the company’s extensive photograph archive, the images in this exhibit will provide a unique look into life at Wright’s.

To view the exhibition panels